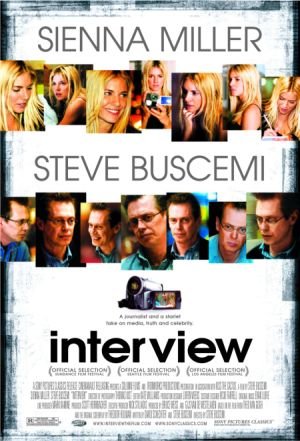 How to Watch Interview 2007 Online in The UK

The cast of Interview

What is Interview about?

Everyone wants a piece of a celebrity. Pierre is a political reporter, assigned to write a fluff piece on Katya, a blond who acts in slasher movies and a Fox show about single girls in the city. The interview, at a restaurant, goes badly: she's late, he's unprepared and rude. After leaving, he bangs his head in a fender bender and she takes him to her loft to clean the wound. Lubricated by alcohol and competitive natures, the interview resumes. She takes phone calls from her fiancé, Pierre reads her diary on her computer. They discuss wounds, he expresses concern, father-daughter feelings arise. Out come camcorders to tape their darkest secrets. Is friendship or more in the offing?

Where to watch Interview