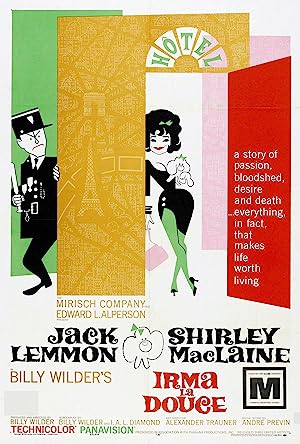 How to Watch Irma la Douce 1963 Online in The UK

The cast of Irma la Douce

What is Irma la Douce about?

Naive, by the book French police officer Nester Patou, is transferred to the Red Light district. Upon witnessing what must be a brothel, he calls the station and organizes a raid, transporting all the 'ladies' to the jail. This unfortunately disrupts the well organized system of the police and the Pimps union. Not to mention inadvertently netting his station superior at the brothel. Fired, he goes to a bar to drink, is befriended by Irma, beats up her pimp, and finds he is now Irma's new pimp. Nester's doesn't like the thought of his girl seeing other men, so comes up with a plan.

Where to watch Irma la Douce