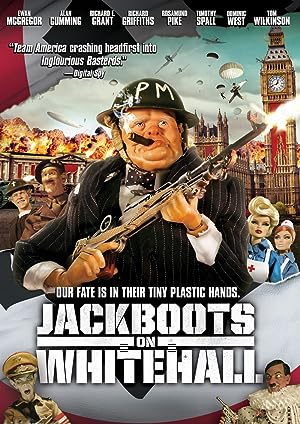 How to Watch Jackboots on Whitehall 2010 Online in The UK

The cast of Jackboots on Whitehall

What is Jackboots on Whitehall about?

World War II: What if Nazis seized London and all of England had to band together? When scarily campy Nazi leaders invade by drilling under the English Channel and up through the cobblestones on Whitehall, Churchill leaves his quiet retirement with a cat that looks like Hitler to issue a call to arms from his bunker under Downing Street. Chris, a young farm worker with large hands, rallies the village to fight the good fight -- including an alcoholic Vicar, the oldest man in the town, several idiots, a random Frenchman and Bobby Fiske, a swearing American who believes he's battling Russia. The world's future is in their tiny plastic hands. Innovative puppeteering animatronics from Scottish brothers Edward and Rory McHenry combine with the larger-than-life voices of Ewan McGregor, Alan Cumming, Dominic West, Rosamund Pike, Tom Wilkinson, Timothy Spall and Richard E. Grant.

Where to watch Jackboots on Whitehall