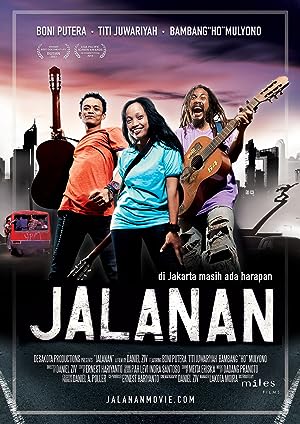 How to Watch Jalanan 2013 Online in The UK

The cast of Jalanan

What is Jalanan about?

JALANAN ('Streetside') is the captivating story of Boni, Ho and Titi - three gifted, charismatic bus musicians in Jakarta - and through them a mostly unknown story of contemporary Indonesia. JALANAN intimately portrays the young musicians' quirky sub-culture while also painting an alarming portrait of Indonesia's frenzied capital city that is raw, humorous and brutally honest. JALANAN accompanies the three characters as they perform songs of social angst, get caught in political unrest, face family crises and get locked up by police. It follows them to their distant home villages in Java and traces their elusive, heartfelt quest for identity and love in an adopted city rapidly being overrun by the effects of globalization. A powerful soundtrack of the musicians' original compositions drives the film.

Where to watch Jalanan