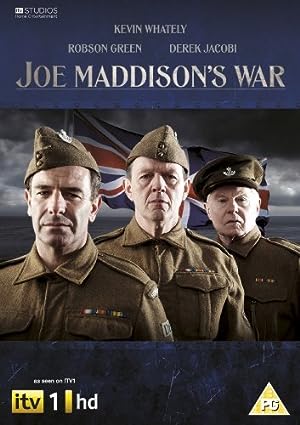 How to Watch Joe Maddison's War 2010 Online in The UK

The cast of Joe Maddison's War

What is Joe Maddison's War about?

Tyneside ship-builder Joe Maddison lost his faith in the trenches at the Somme in 1916. Now that World War Two has begun he is too old to enlist alongside his son and son-in-law and is also in a reserved occupation so, after his wife Polly has left him for a sailor,he joins the Home Guard with his friends,Marxist Eddie and cynical,wise-cracking Harry.Harry's anti-authoritarian attitude causes problems with Mr. Simpson,the company commander,and Joe leads the men out on strike after Harry is expelled. However,after he has dealt with an unexploded bomb he is acclaimed a hero,and,along with his friends, reinstated,being promoted to corporal.He also meets widow Selina who brings him out of his shell but Polly returns,with the sailor's child,seeking a reconciliation, a request which splits the family. Come 1945 and the war is ending but Joe still has his personal conflict to resolve.

Where to watch Joe Maddison's War