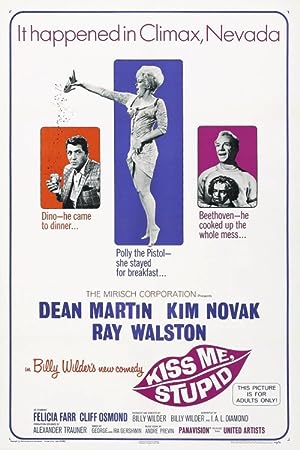 How to Watch Kiss Me, Stupid 1964 Online in The UK

The cast of Kiss Me, Stupid

What is Kiss Me, Stupid about?

Dino, the charming and lecherous Las Vegas singer, stops for gas on his way to Hollywood in Climax, Nevada. The oily gas station attendant is Barney Millsap, a would-be lyricist who writes pop songs with Orville Spooner, the local piano teacher. By disabling Dino's car, Barney contrives a scheme to have Dino sing one of their songs on an upcoming TV special. To entertain Dino, Barney contacts the village tart, Polly, employing her to pretend to be Orville's wife, Zelda, for a night. She doesn't like Dino, but does love being Orville's surrogate wife. Dino goes to a bar, where he meets the real Zelda, and they spend the night together while Polly spends it with Orville.

Where to watch Kiss Me, Stupid