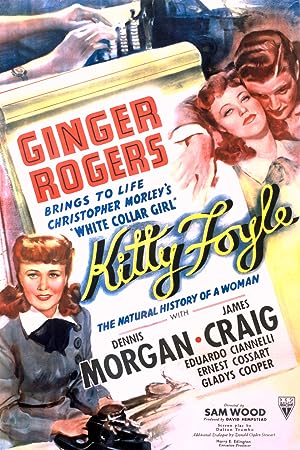 How to Watch Kitty Foyle 1940 Online in The UK

The cast of Kitty Foyle

What is Kitty Foyle about?

A white collar worker from a blue collar family, Kitty Foyle has spent her so far short adult life in her hometown of Philadelphia or New York City. She has had two serious relationships, one associated with each city and each man with who she falls in love but in vastly different ways. "Philadelphia" is blue blooded Wyn Strafford VI. Wyn hires Kitty to be his secretary, he the editor for his pet project, a magazine, which is funded by family money. Kitty's now deceased father, despite liking Wyn as a person, warned Kitty against falling in love with him, regardless of his outward intentions, as his type always returned to his own kind. If she believes her father, Kitty may come to the realization that if a union with Wyn were to ever happen, it would not only be to him but to his family and their traditions, they who may have some say in the matter. After the magazine folds, it not making any money, Kitty is forced to look for another job, she feeling she would have more opportunities in New York City. Working as a sales associate at upscale Delphine Detaille parfumerie and cosmetics, Kitty meets "New York City", Mark Eisen. Mark is a public health doctor who makes little money and thus who is cognizant about how he spends that money, most specifically when he will splurge on the luxuries in life, including on women. Simultaneous, each of the men proposes a future together with her, those futures which would take divergent paths and have different outlooks. Mark, specifically, is aware of there being a "Philadelphia" when he asks her to marry him. Kitty has to decide what kind of future she wants for herself in choosing which of the two proposals she will accept.

Where to watch Kitty Foyle