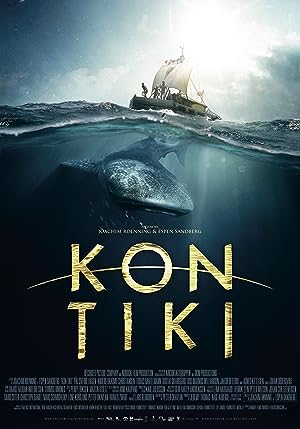 The cast of Kon-Tiki

What is Kon-Tiki about?

The Norwegian explorer Thor Heyerdahl crossed the Pacific Ocean in a balsawood raft in 1947, together with five men, to prove that South Americans back in pre-Columbian times could have crossed the ocean and settled on Polynesian islands. After financing the trips with loans and donations, they set off on an epic 101-day-long trip across 8000 kilometers, while the world was waiting for the result of the trip. The film tells about the origin of the idea, the preparations, and the events on the trip. The "Kon-Tiki" was named after the Inca sun god, Viracocha, and "Kon-Tiki" is an old name for this god. Heyerdahl filmed the expedition, which later became the Academy Award winning documentary in 1951, and he wrote a book about the expedition that was translated into 70 languages and sold more than 50 millions copies around the world. Heyerdahl believed that people from South America could have settled Polynesia in pre-Columbian times, although most anthropologists now believe they did not. Anyway he proved that it was possible by using only the materials and technologies available to those people at that time. The trip took 101 days over 4,300 miles across the Pacific Ocean before the "Kon-Tiki" crashed onto the dangerous reefs outside Raroia in the Tuamotu Islands on August 7, 1947. All crewmen survived, and the "Kon-Tiki" was taken back to Norway. She is now featured in the Kon-Tiki Museum.

Where to watch Kon-Tiki