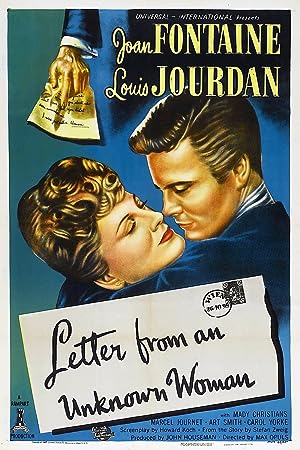 The cast of Letter from an Unknown Woman

What is Letter from an Unknown Woman about?

In Vienna in 1900, Stefan Brand must face a duel the following morning. He has no intention of defending his honor however and plans to flee the city when he notices that he has received a letter from someone in his past. A struggling concert pianist at the time he met Lisa Berndle when she was just a teenager living next door. Brand has had many women in his life however and unaware that Lisa is genuinely in love with him, forgets all about her. They meet again but he only vaguely remembers ever having met her. Unknown to him she bears his child and eventually marries a man who knows of her past but loves her very much. When she runs into Brand many years later her love for him resurfaces and she is prepared to abandon her son and husband for him. Tragedy follows.

Where to watch Letter from an Unknown Woman

More Drama movies like Letter from an Unknown Woman

More Drama tv shows like Letter from an Unknown Woman