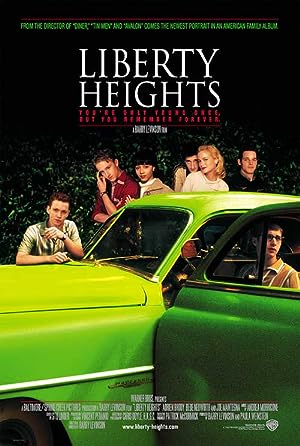 How to Watch Liberty Heights 1999 Online in The UK

The cast of Liberty Heights

What is Liberty Heights about?

Anti-Semitism, race relations, coming of age, and fathers and sons: in Baltimore from fall, 1954, to fall, 1955. Racial integration comes to the high school, TV is killing burlesque, and rock and roll is pushing the Four Lads off the Hit Parade. Ben, a high school senior, and his older brother Van are exploring "the other": in Ben's case, it's friendship with Sylvia, a Black student; with Van, it's a party in the WASP part of town and falling for a debutante, Dubbie. Sylvia gives Ben tickets to a James Brown concert; Dubbie invites Van to a motel: new worlds open. Meanwhile, their dad Nate, who runs a numbers game, loses big to a small-time pusher, Little Melvin; a partnership ensues.

Where to watch Liberty Heights