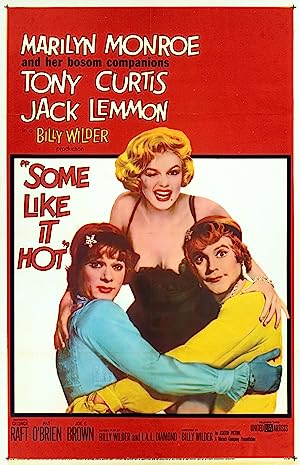 After two Chicago musicians, Joe and Jerry, witness the the St. Valentine's Day massacre, they want to get out of town and get away from the gangster responsible, Spats Colombo. They're desperate to get a gig out of town but the only job they know of is in an all-girl band heading to Florida. They show up at the train station as Josephine and Daphne, the replacement saxophone and bass players. They certainly enjoy being around the girls, especially Sugar Kane Kowalczyk who sings and plays the ukulele. Joe in particular sets out to woo her while Jerry/Daphne is wooed by a millionaire, Osgood Fielding III. Mayhem ensues as the two men try to keep their true identities hidden and Spats Colombo and his crew show up for a meeting with several other crime lords.