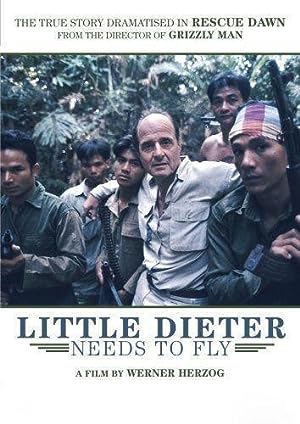 The cast of Little Dieter Needs to Fly

What is Little Dieter Needs to Fly about?

In 1966, Dieter Dengler was shot down over Laos, captured, and, down to 85 pounds, escaped. Barefoot, surviving monsoons, leeches, and machete-wielding villagers, he was rescued. Now, near 60, living on Mt. Tamalpais, Dengler tells his story: a German lad surviving Allied bombings in World War II, postwar poverty, apprenticed to a smith, beaten regularly. At 18, he emigrates and peels potatoes in the U.S. Air Force. He leaves for California and college, then enlistment in the Navy to learn to fly. A quiet man of sorrows tells his story: war, capture, harrowing conditions, escape, and miraculous rescue. Where did he find the strength; how does he now live with his memories?

Where to watch Little Dieter Needs to Fly