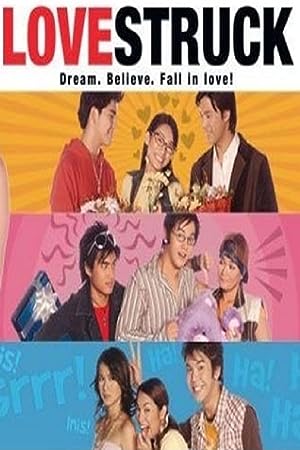 How to Watch Lovestruck 2005 Online in The UK

The cast of Lovestruck

What is Lovestruck about?

The story revolves around Denise, a hopeless romantic who desperately seeks for her soul mate. Part of her strategy is to always consult the book authored by the love guru Jandra. Every single love tip in the book was followed, just so the man of her dreams Jason would notice her. Jason eventually falls in love with her but just as she should be the happiest girl in the world, Denise realizes that there's something lacking and her happiness seems incomplete. Can it be that her soul mate is the one who's been with her since childhood - her best friend for life Caloy who's secretly in love with her for as long as he remembers and has been hurting since the day she tried to win Jason's heart? Follow this romantic story of Denise, Caloy and Jason together with the other colorful characters completing their barkada: Cholo, Denise's gay best friend and tag team in doing Jandra love tips as she searches for the man of her life; Jojo, the beautiful tomboy whom Cholo's dream boy likes very much, making her Cholo's number one rival in Lloyd's heart; Lloyd, Cholo's "man" of his dreams and Jason's homophobic best friend; Myka, Jason's sister who's supportive of his brother's love for Denise; Cocoy, Myka's boyfriend; and Sophia, Jason's sophisticated ex-girlfriend who still wants Jason back.

Where to watch Lovestruck