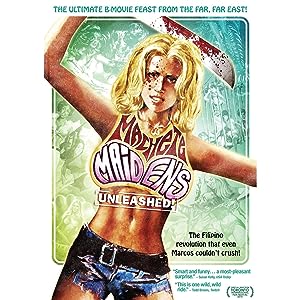 How to Watch Machete Maidens Unleashed! 2010 Online in The UK

The cast of Machete Maidens Unleashed!

What is Machete Maidens Unleashed! about?

Karate-kicking midgets! Paper-mache monsters! Busty babes with blades! Filipino genre films of the '70s and '80s had it all. Boasting cheap labour, exotic scenery and non-existent health and safety regulations, the Philippines was a dreamland for exploitation filmmakers whose renegade productions were soon engulfing drive-in screens around the globe like a tidal schlock-wave! At last, the all-too-often overlooked world of drive-in filler from Manilla gets the Mark Hartley (NOT QUITE HOLLYWOOD) treatment in Machete Maidens Unleashed! This is the ultimate insiders' account of a faraway backlot where stunt men came cheap, plot was obsolete and the make-up guy was packing heat! Machete Maidens Unleashed! features interviews with cult movie icons Roger Corman, Joe Dante, John Landis, Sid Haig, Eddie Romero and a large assembly of cast, crew and critics, each with a jaw-dropping story to tell about filmmaking with no budget, no scruples, no boundaries and - more often than not - no clothes. Strap yourselves in - and join us for a non-stop Filipino femme-fest, all the way from the jungles of the Pacific via the trash cans of the critics!

Where to watch Machete Maidens Unleashed!