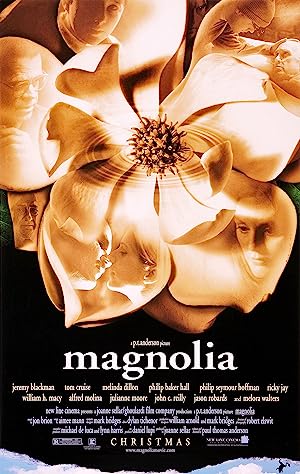 How to Watch Magnolia 1999 Online in The UK

The cast of Magnolia

What is Magnolia about?

24 hours in L.A.; it's raining cats and dogs. Two parallel and intercut stories dramatize men about to die: both are estranged from a grown child, both want to make contact, and neither child wants anything to do with dad. Earl Partridge's son is a charismatic misogynist; Jimmy Gator's daughter is a cokehead and waif. A mild and caring nurse intercedes for Earl, reaching the son; a prayerful and upright beat cop meets the daughter, is attracted to her, and leads her toward a new calm. Meanwhile, guilt consumes Earl's young wife, while two whiz kids, one grown and a loser and the other young and pressured, face their situations. The weather, too, is quirky.

Where to watch Magnolia