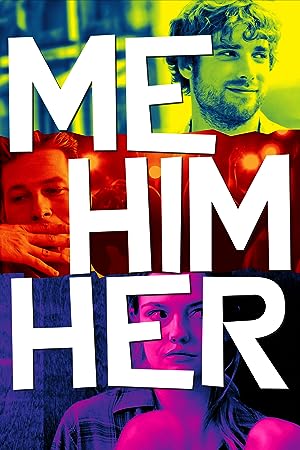 The cast of Me Him Her

What is Me Him Her about?

Brendan Ehrlick, star of TV's popular cop series "Hard Justice," would like to come out of the closet to his parents. His first step? Come out to his best friend Cory in Florida and solicit his help. Cory already knows he's gay but comes to L.A. anyway, where his actions, rather than help Brendan, put him in awkward, possibly career-threatening situations. As corporate managers advise Brendan to remain uninformative in dealing with paparazzi, Cory ventures off into a one-night-stand with Emily, a lesbian on the rebound from a toxic relationship. He falls for her, but being with him confuses her life-long lesbian identity. Her struggles with this prompt Cory towards suddenly becoming a better friend to Brendan, leading to an immediate abduction followed by a violent, sword-wielding confrontation at the "Hard Justice" cast party.

Where to watch Me Him Her

Me Him Her Trailer