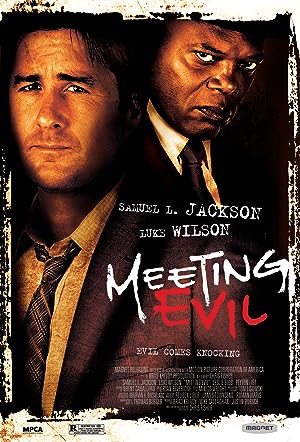 How to Watch Meeting Evil 2012 Online in The UK

The cast of Meeting Evil

What is Meeting Evil about?

The real estate agent John is down on his luck: he has been just fired from his job; his home has been sent into foreclosure; and his marriage is going downhill. On his birthday, his wife Joanie has an argument with him and she takes their children walking. Out of the blue, stranger Richie knocks on his front door and asks for help, since his car is not starting. John helps to push the car but hurts his leg, and Richie offers to take him to the hospital. Richie is inconvenient and along their journey, John realizes that the man is a psychopath killer that commits a spree killing everywhere they go. Then, Richie releases John on the road and tells him that he will pay a visit to Joanie and his children. Meanwhile, the police detectives Frank and his partner Latisha Rogers suspect that John is the serial-killer and they pressure Joanie to tell where John might be. Further, they discover that John and Joanie are cheating each other with a colleague and with a worker respectively.

Where to watch Meeting Evil