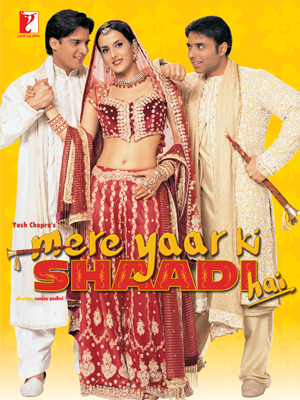 What is Mere Yaar Ki Shaadi Hai about?

Love hits people in all sorts of ways. To Sanjay (Uday Chopra) however, love hit him like a ton of bricks. Sanjay is the dithering Casanova, constantly bungling up his romantic liaisons, till one day the phone rings. Anjali (Sanjana) his childhood friend is getting married. It's now that the bricks fall on him. Observing Sanjay's reaction to this news and hearing him talk of Anjali, his flat mate Ria (Bipasha Basu) concludes that Sanjay is in love with her. Sanjay wakes up to this truth, reluctantly but surely and sets off on a noble mission - to break the wedding. He is overjoyed to be reunited with Anjali - till he meets the groom to be - handsome, charismatic, every girl's dream guy, Rohit (Jimmy Shergill). Nevertheless, Sanjay's love for Anjali compels him to take on the world and he sets off on his crusade of poisoning the family's mind against Rohit. It's all about a clash between the good and the not-so-good.