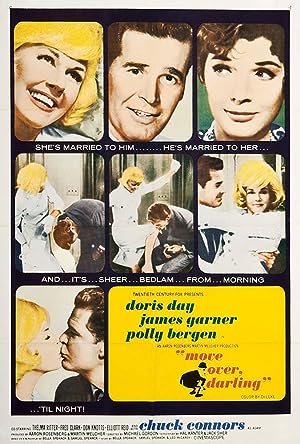 How to Watch Move Over, Darling 1963 Online in The UK

The cast of Move Over, Darling

What is Move Over, Darling about?

Three years into their loving marriage, with two infant daughters at home in Los Angeles, Nicholas Arden and Ellen Wagstaff Arden are on a plane that goes down in the South Pacific. Although most passengers manage to survive the incident, Ellen presumably perishes when swept off her lifeboat, her body never recovered. Fast forward five years. Nicky, wanting to move on with his life, has Ellen declared legally dead. Part of that moving on includes getting remarried, this time to a young woman named Bianca Steele, who, for their honeymoon, he plans to take to the same Monterey resort where he and Ellen spent their honeymoon. On that very same day, Ellen is dropped off in Los Angeles by the Navy, who rescued her from the South Pacific island where she was stranded for the past five years. She asks the Navy not to publicize her rescue nor notify Nicky as she wants to do so herself. Upon arrival back home, a shocked Grace Arden (Nicky's mother) informs Ellen that Nicky just got remarried that morning and that Ellen, his true wife (as opposed to Bianca, his new bride), should go to Monterey to tell Nicky she's alive. She does, and Nicky is equally as shocked as his mother at seeing Ellen alive, but it places him in a difficult position. Although he loves Ellen and wants more than anything to be with her, he has Bianca's feelings to take into consideration. As such, he finds it difficult to tell Bianca, who is in a honeymoon amorous mood. Nicky's inability to tell Bianca irks Ellen, who believes it is a manifestation of his love for Bianca over her. Nicky, however, ends up with questions of his own about Ellen's faithfulness and love for him when he learns that Ellen was not all alone on that island but stranded with a handsome man named Stephen Burkett (with whom the two nicknamed each other Adam and Eve). Nicky's questions about her faithfulness increase when she purposefully withholds information about Stephen from him.

Where to watch Move Over, Darling