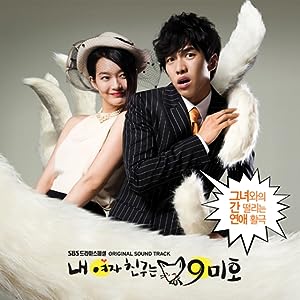 The cast of My Girlfriend Is a Gumiho

What is My Girlfriend Is a Gumiho about?

Cha Dae-woong (Lee Seung Gi) accidentally releases a troublesome gumiho, a legendary fox with nine tails, sealed inside a painting by Grandma Samshin . Fleeing the scene, Dae-woong suffers a life-threatening fall and is only saved by the gumiho giving him her "fox bead". When Dae-woong awakes and meets a mysterious pretty girl, he initially treats her as eccentric or mentally ill, before fully understanding she is a gumiho in disguise-at which point he tries to research gumihos, but fails to find correct information in the library or on the internet. He agrees to stay with her and he tries to keep her happy, while hiding her true identity as a gumiho from all others by introducing her as his friend, Mi Ho. Slowly, however, he becomes less scared of her and more protective of her-finally admitting to himself and to her that he loves her. As the story unfolds, Mi Ho (Shin Min Ah) pursues her goal of becoming human, with the half-human, half-supernatural Park Dong Joo, who has a career as a veterinarian and has been living as a half-human for hundreds of years, informing her that to do so, she must drink his blood and allow a human to keep her fox bead inside their body for a full 100 days - faithfully entering into a Love Contract, and keeping the bead from being harmed by remaining chaste. However, Dong Joo does not mention that at the end of the 100 days the human will die. Mi Ho and Dae Woong fall in love without fully knowing the consequences of fulfilling her goal: namely, that Woong will die if she becomes fully human.

Where to watch My Girlfriend Is a Gumiho

More Comedy movies like My Girlfriend Is a Gumiho

More Comedy tv shows like My Girlfriend Is a Gumiho