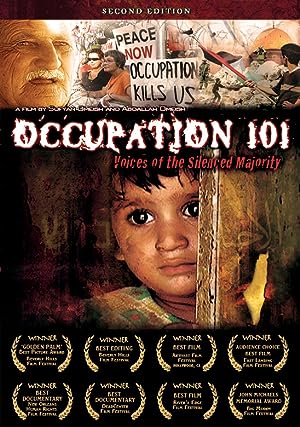 The cast of Occupation 101

What is Occupation 101 about?

'Occupation 101' presents a comprehensive analysis of the facts and hidden truths surrounding the Israeli-Palestinian conflict and dispels many of its long-perceived myths and misconceptions. The film also details life under Israeli military rule, the role of the United States in the conflict, and the major obstacles that stand in the way of a lasting and viable peace. Unlike any other film produced on the conflict, 'Occupation 101' explains the complicated reality with precision storytelling through a series of highly stylized visual edits, and gives audiences a complete context with which to better understand the Israeli-Palestinian debate. The roots of the conflict are explained with thought-provoking commentaries from leading Middle East scholars, peace activists, journalists, religious leaders and humanitarian workers whose voices have too often been suppressed in American media outlets.

Where to watch Occupation 101