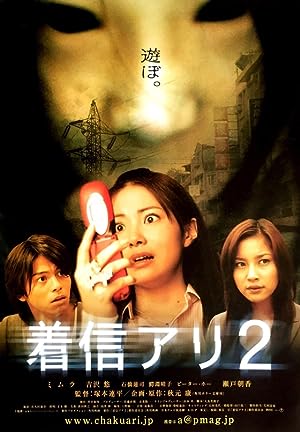 The cast of One Missed Call 2

What is One Missed Call 2 about?

In Japan, the daycare teacher Kyoko Okudera is convinced by her colleague and friend Madoka to visit her boyfriend Naoto Sakurai in the restaurant where he works instead of studying as planned. When the owner Mr. Wang answers his daughter's mobile phone, he receives a message telling him that he would die in an accident in the kitchen. This immediately comes true. Later, Naoto is visited by the snoopy journalist Takako Nozoe, who is researching the death call, and she plays the deadly ring tone for him. He recalls that not only Mr. Wang, but also Madoka have received similar calls. Meanwhile Kyoko is talking to Madoka and she sees a ghost in her phone. She rushes to Madoka's apartment and finds her dead in the bathtub, with Naoto and Takako arriving immediately after. Their investigation shows that Mimiko's grandfather Wei Zhang is in Taiwan and Takako asks her former husband Yuting to search him. Meanwhile, Kyoko receives a phone call and the autopsies of Mr. Wang and Madoka indicate the presence of coal dust in their lungs and no candies in their mouths. Takako, Naoto and Kyoko travel to Taiwan expecting to solve the mystery and save Kyoko from her fate.

Where to watch One Missed Call 2