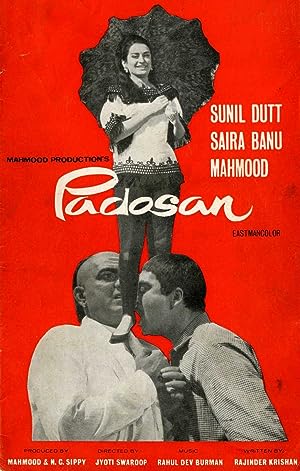 How to Watch Padosan 1968 Online in The UK

The cast of Padosan

What is Padosan about?

Bhola (Sunil Dutt) is a simple minded young man who has taken a vow to act according to the book of shashtras, which dictate that a man must marry when he is of the right age. He meets with lovely Bindu (Saira Banu) and falls head in love with her. Coincidentally, Bindu moves in next to his house. Bhola is thrilled, but soon despairs when he learns that Bindu has given her heart to Master Pillai (Mehmood). Bhola's friends Vidyapathi (Kishore Kumar), Banarasi (Mukri), and others belonging to an acting troupe, assist in hoodwinking Bindu to get attracted to Bhola, and thereby getting his love life back, but there are unexpected twists and turns, and Bhola's lies are exposed, making Bindu return to her plans to marry Master Pillai. Songs include: "Me chali me chali dekho pyar ki gali mujhe rokhe na koi..."; "Bhai bathur ab jaienge kitni door, najook najook meri jawani chalne se majboor..."; "Ik chatur naar karke singhar mere man ke duar ye goosath jaat..."; "Sarm ahti hai magar aaj yeh kahena hoga ab hamey aap ke kadmon main rahena hoga..."; "Kahena hai kahena hai akhir aaj ye tumse pehli baar, tum hi to lai ho jeevan me mere pyar pyar pyar....".

Where to watch Padosan