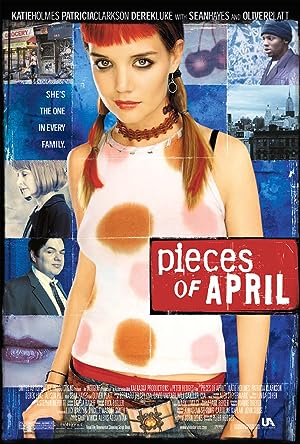 How to Watch Pieces of April 2003 Online in The UK

The cast of Pieces of April

What is Pieces of April about?

In a very poor zone of New York, April Burns and her boyfriend, the Afro-American Bobby, are preparing to receive April's family for thanksgiving dinner. While Bobby tries to borrow a suit for himself, April realizes that her stove is broken. She tries desperately to find a neighbor that can let her cook the turkey, since she does not want to fail (again) with her family. Meanwhile, in a suburb of Pennsylvania, her dysfunctional family is preparing to travel to New York. While driving, the relationship between the Burns and their black-sheep April is disclosed through the conversations between her father Jim, her resented mother Joy, her brother, her sister and her grandmother.

Where to watch Pieces of April