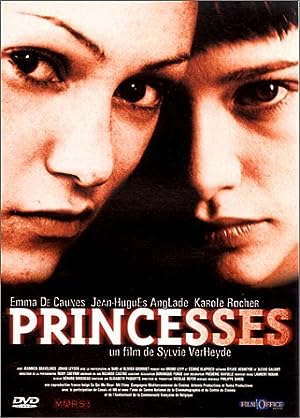 How to Watch Princesses 2000 Online in The UK

The cast of Princesses

What is Princesses about?

Johan has three children with different women. Two adult daughters: Sophie and Virginie, and a young son in Amsterdam. Loïc gave Johan diamonds of a criminal origin. Her husband Simon thought they were his and murdered her. Then he set out his hunt for the diamonds and for killing Johan. The police thought that Johan had murdered Loïc and called his daughters, who had not known about each other. Afterwards Sophie receives a note to take a certain train to Amsterdam. A young boy gives Virginie the oral message "The treasure is in the trout". She immediately understands that this trout must be in her mother's freezer, unknown to the mother. Both girls take the train. Simon contacts them as a helpful fellow-passenger. The girls soon detect his aim of murdering them. In Brussels they escape the train. Virginie steals a car but is not as good at driving as at stealing (she will prove this again). But they do come to Amsterdam where a tumultuous series of events involve both threatening and real death for several of the main persons. As survivor Sophie carries out the girls' decision to give the diamonds to their half-brother.

Where to watch Princesses