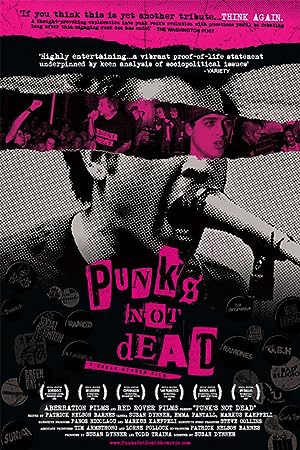 How to Watch Punk's Not Dead 2007 Online in The UK

The cast of Punk's Not Dead

What is Punk's Not Dead about?

On the edge of the 30th anniversary of punk rock, Punk's Not Dead takes you into the sweaty underground clubs, backyard parties, recording studios, and yes, shopping malls and stadium shows where punk rock music and culture continue to thrive. Thirty years after bands like the Ramones and the Sex Pistols infamously shocked the system with their hard, fast, status-quo-killing rock, the longest-running punk band in history is drawing bigger crowds than ever, "pop-punk" bands have found success on MTV, and kids too young to drive are forming bands that carry the torch for punk's raw, immediate sound. Meanwhile, "punk" has become a marketing concept to sell everything from cars to vodka, and dyed hair and piercings mark a rite of passage for thousands of kids. Can the true, nonconformist punk spirit still exist in today's corporatized culture? Featuring interviews, performances, and behind-the-scenes journeys with the bands, labels, fans, and press who keep punk alive, Punk's Not Dead dares to juxtapose pop-punk's music and lifestyle against the roots in the 70s and 80s, resulting in unexpected revelations. A DIY search for the soul of a subculture and a celebration of all things loud, fast, and spiked, Punk's Not Dead shows punk is stronger and more relevant today than it's ever been.

Where to watch Punk's Not Dead