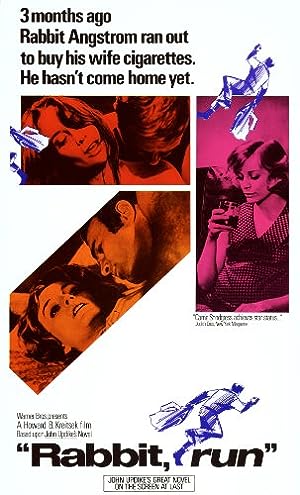 The cast of Rabbit, Run

What is Rabbit, Run about?

Harry and Janice Angstrom of Reading, Pennsylvania, have a young adolescent son, Nelson Angstrom. An artificial stone siding salesman, Harry is still most defined as a star basketball player from his high school days, then when he was nicknamed Rabbit. On a Friday evening, Harry, based on events earlier in the day that made him quit smoking cold turkey to be a better person, decides, also on the spur of the moment, to abandon his job and the family, alcoholic Janice who he only married because she was pregnant with Nelson and who in turn doesn't seem to care about him or Nelson, except for the support she requires from him to survive. Him leaving is despite Janice being pregnant. With no plans, he hops in the car with nothing more than the clothes on his back. In the short term, he decides he wants to stay with a friend of a friend he meets the following night, Ruth Leonard, a party girl. What happens in the intervening months is that life around him still dictates what he does, his attempts to foster some semblance of what he considers a normal, a loving relationship even on the first night with Ruth still only him reacting to life around him. Harry still knows about what is going on with the family as Janice's family's pastor, Reverend Jack Eccles, enters his life, his end goal to get Harry to return to Janice on his own want. Through it all, Harry may or may not ultimately find what he's looking for for himself.

Where to watch Rabbit, Run