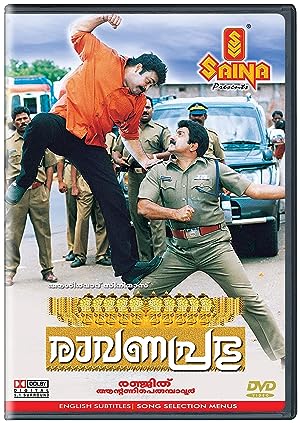 How to Watch Ravanaprabhu 2001 Online in The UK

The story begins with the fall of Mangalasherry Neelakantan's (Mohanlal) son Karthikeyan (Mohanlal), as he ventures out to make money which ultimately makes him a liquor baron. The relationship between Neelakantan and Karthikeyan deteriorates, as the father does not approve of his son's money-making methods. Mundakkal Shekharan ( Napoleon) comes into the picture again after spending a term in prison for killing one of Neelakantan's friends. He decides to finish the Mangalasherry family by confiscating the house which was kept as collateral for Bhanumathi's (Revathy ) treatment. Bhanumathi passes away and Karthikeyan is now bent on taking revenge. Neelakantan loses his home and Karthikeyan ventures out in an attempt to reclaim his ancestral home. In the meantime, Karthikeyan abducts Shekharan's daughter Janaki (Vasundhara Das) in an attempt to blackmail him (Shekharan), during which they fall in love with each other. The remainder of the movie is about how Karthikeyan manages to get his ancestral home back while Shekharan's nephew Mundakkal Rajendran (Vijayaraghavan ) makes attempts to kill Karthikeyan, but instead neelakandan gets killed and karthikeyan ventures out to kill Mundackal shekharan.