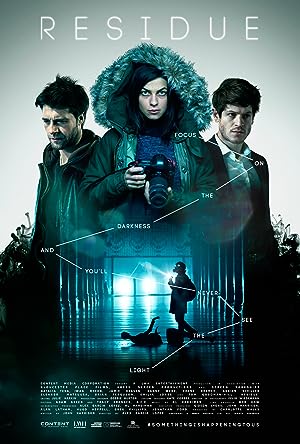 How to Watch Residue 2015 Online in The UK

The cast of Residue

What is Residue about?

An unnamed UK metropolis. The future. Renowned photojournalist JENNIFER PRESTON is investigating the aftermath of a terrible explosion that ripped through the city on New Year's Eve. Known simply as 'The Catastrophe', this shocking tragedy has left behind a festering wound. The city is on edge, thousands have evacuated and a sprawling, militarized Quarantine Zone has been erected around the epicentre of the blast. The 'QZ', as it becomes known, is a network of empty buildings and abandoned streets, shrouded beneath clinical plastic and fenced in behind impenetrable barricades. Heavily armed security units ensure that nobody goes in and nobody comes out. As unexplained and increasingly bizarre acts of violence erupt across the city, Jennifer begins to notice strange, ephemeral phantoms in her photographs. What begins as an artistic documentation of The Catastrophe's lingering aftershock soon becomes an obsession with 'The Phenomenon' - a seeming paranormal phenomenon gripping the perimeter of the Quarantine Zone. Jennifer slowly but surely becomes convinced that The Catastrophe and The Phenomenon she is uncovering are not disconnected. And when her theories eventually incite interest, not all of which are welcome, Jennifer learns that the reality is more complex, and dangerous, than even she imagined. Jennifer's investigation becomes a race against time. Can she discover the cause of the Catastrophe before the authorities get to her? Can she save her boyfriend, government advisor JONAS FLACK, from the danger inside the QZ when the evidence she uncovers goad him to investigate for himself? And what of her one ally, detective LEVIS MATHIS, who's own search for the truth behind The Catastrophe, in which his daughter died, brings him into direct conflict with the dangerous and powerful conspirators orchestrating events? Most importantly, can she solve the chilling riddle of the strange entities in her photographs before The Phenomenon rips her life apart?

Where to watch Residue