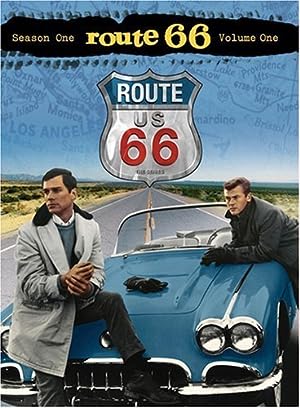 How to Watch Route 66 Online in The UK

The cast of Route 66

Only fiction series written & shot all over North America. Two young adventurers in a Corvette explore early 60's social problems and changing mores, looking for the right place to settle down while seeking themselves. Debuting 3 years after "On the Road" transformed modern literature, while such newly available fast cars dominated the new teenage culture, Tod, an Ivy Leaguer, and Buz, an orphan from Hell's Kitchen, cruise the U.S.A. coping with shifting relationships and lifestyles. The FCC's Newton Minow characterized U.S. TV as a "vast wasteland," in 1961, but "Route 66" found important, compelling stories all over. Sterling Silliphant who won an Oscar for writing "In the Heat of the Night," traveled around the U.S. and Canada scouting locales, while writing ¾ of the very dark, literate show's episodes - a feat only Rod Serling matched with The Twilight Zone. Soon, a crew of 50 arrived at the location. Shows were filmed in 40 States. Tod, from a once-wealthy family, inherited only a Corvette when his father died, so he and Buz (suddenly jobless because he worked for Tod's father's company) strike out across North America, especially along the iconic Route 66 from Chicago to L.A. which the Okies traveled. Tod and Buz take local jobs (such as shrimping, shipbuilding, oil rigging) to support their wanderings. The 2 socially conscious knights of the road, encourage, champion, and learn from oppressed and troubled people they encounter. 1962 guest star Ethel Waters was the first African-American woman nominated for an Emmy Award. The CBS show doubled Corvette sales its first season. Tod and Buz's beige Corvette's 2 seats meant "sans souci" and constant movement, so shows were shot in 6 days, in a new city almost every week. The two drifters reject the post-war American Dream of the suburbs, while exploring a disappearing North America with very diverse local culture, not yet dominated by international franchises and cookie-cutter suburbs. The shows' vibrate with the new dreams for a Great Society and the fears of the Cold War. The volatile Buz Murdock was cast quickly, while Martin Milner beat out Robert Redford for the Tod Stiles role. Due to hepatitis, Maharis did not appear in the series' last 1 ½ seasons. The show grew from a pilot on creator Silliphant and Route 66 producer Herbert B. Leonard's "Naked City," also shot on location. Naked City and Route 66 bridged the widely varied anthologies and live plays of the 1950's Golden Age of Television, to the much cheaper, 1 hour dramatic, set-character based series, which continue to rule prime-time. Nelson Riddle's atmospheric Theme from Route 66, and his episode scores factored heavily in the show's allure. The breezy song Route 66, written by Bobby Troup (of the 1970's TV series "Emergency !"), a 1946 Nat King Cole hit, wasn't used for the series. A sequel to Route 66 appeared in 1993, but lasted only 4 episodes.

Where to watch Route 66