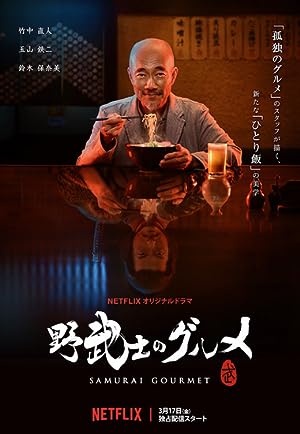 How to Watch Samurai Gourmet Online in The UK

The cast of Samurai Gourmet

What is Samurai Gourmet about?

The live action series "Samurai Gourmet," based on Masayuki Kusumi's essay and the manga of the same title, featuring the life of Takeshi Kasumi. Takeshi Kasumi has spent his entire life devoted to his job. Now a retired man, he finds himself with plenty of extra time on his hands. While on an afternoon walk, Kasumi discovers the joys of day time drinking and the realization that he is now free to eat and drink what he wants, when he wants. This awakens his inner persona - a wandering samurai living life freely in Japan's age of civil wars. Thus begins his search for blissfully delectable delights to satisfy his stomach and the samurai's soul. A retired man's tales of adventure in twelve episodes, including "Lunch Time Beer at a Diner," "The Devilish Madame," "A Croquette for the Heart" and "Wanderer's Italian Lunch."

Where to watch Samurai Gourmet