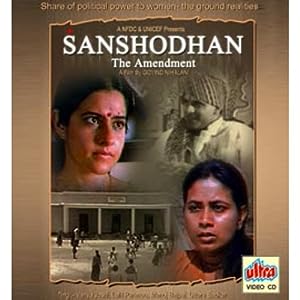 How to Watch Sanshodhan 1996 Online in The UK

The cast of Sanshodhan

What is Sanshodhan about?

Parmino is a small village in Central India, headed by a Village Committee comprising of all males. When the Government of India notifies the Committee that a third of them must be women, including people in schedules caste and tribes, the Sarpanch, Ratan Singh, decides to let women run for the election as well have seats in the Panchayat. After the meeting gets over, he asks his son, Inder, to get Manju, his wife, to sign the nomination papers. Also asked are the wife of another Panchayat member, as well as Vidya, the newly marred bride of a poor store owner, Bhanwar, who is indebted to Inder and Ratan Singh. In this way, Ratan and Inder hope to control the women through their respective husbands, and rule over the Panchayat as they have done before. They are in for a surprise when Vidya turns the tables on them, asking them to account where the funds for the partially built school were misappropriated as well having the rest of the village attend Gram Panchayat meetings and voice their concerns and grievances. Watch what happens when Ratan and Inder decide to use their influence in the community as well as over Bhanwar to throttle Vidya's voice.

Where to watch Sanshodhan