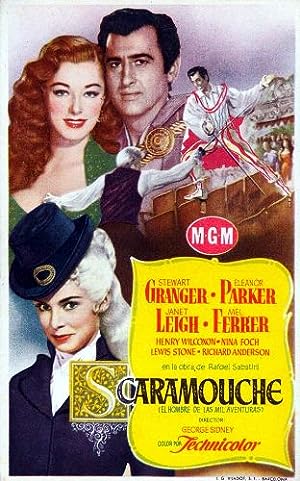 How to Watch Scaramouche 1952 Online in The UK

The cast of Scaramouche

What is Scaramouche about?

Andre-Louis Moreau is a nobleman's bastard in the days of the French revolution. Noel, the Marquis de Mayne, a nobleman in love with the Queen, is ordered to seek the hand of a young ingenue, Aline, in marriage. Andre also meets Aline, and forms an interest in her. But when the marquis kills his best friend Andre declares himself the Marquis's enemy and vows to avenge his friend. He hides out, a wanted man, as an actor in a commedia troupe, and spends his days learning how to handle a sword. When de Maynes becomes a spadassinicide, challenging opposing National Assembly members to duels they have no hope of winning, Andre becomes a politician to protect the third estate (and hopefully ventilate de Maynes).

Where to watch Scaramouche