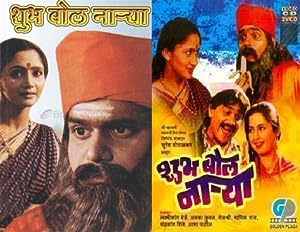 How to Watch Shubha Bol Narya 1990 Online in The UK

The cast of Shubha Bol Narya

What is Shubha Bol Narya about?

Narya works within honesty doing odd jobs for Patil in his village everyone considers him as a curse as whatever he speaks turns out to be true.The only respect h ha sis from Laxmi who loves and respects his honesty.Patil has a relative Dolly coming from Mumbai who spends most of the time with Narya seeing the village but eventually loves Mithun and gets pregnant with him.The villagers blame Narya for her pregnancy and throw him out of the village by insulting him.But Narya swears to return back with respect few months later he arrives in the village posing as a Maharaj and things start to happen good in village according to what he says.But Maharaj predicts there is a big curse to come on village which will destroy everything and the only way save is to bring back Narya to village with respect.

Where to watch Shubha Bol Narya