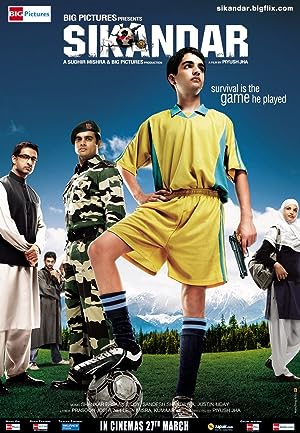 How to Watch Sikandar 2009 Online in The UK

The cast of Sikandar

What is Sikandar about?

14-year-old Sikandar Raza has been living with his uncle and aunt in Kashmir, ever since his parents were killed by militants 10 years ago. The young boy, who dreams of a better life for his family by realizing his football talent, is a bit of a loner at school and an easy target for the school bullies. One day on his way home from a school football match, Sikandar finds a pistol lying on the path. Despite being warned against it by his new friend Nasreen, Sikandar picks up the pistol believing it to be the answer to his problems. When playing with the pistol alone in the woods, Sikandar meets a young man who teaches him how to be a great shot, but the young man is not who he seems and Sikandar innocently becomes caught up in political warfare. Although the quiet Nasreen acts as Sikandar's conscience, Sikandar gets further embroiled in situations beyond his control, and innocent people get killed. As the story unfolds we see that Sikandar is an innocent victim in a game being played out between the militants, the army, the peace-bartering Politians and religious heads of the little Kashmiri town.

Where to watch Sikandar