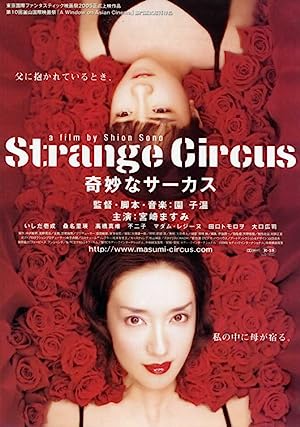 How to Watch Strange Circus 2005 Online in The UK

The cast of Strange Circus

What is Strange Circus about?

In Tokyo, the twelve year-old girl Mitsuko accidentally sees her parents having sex in their bedroom and her dysfunctional and pervert father Ozawa Gozo, who is the principal of her school, forces her to see her mother Sayuri having intercourse with him hidden inside a cello case. Then Osawa rapes Mitsuko and forces her mother to see the incestuous intercourse with their daughter. Osawa lives with Mitsuko and Sayuri and has sex with them, and Sayuri is jealous of her own daughter. The dysfunctional family is affected first by a murder and then by an attempt of suicide. But the bizarre story is actually a novel written by the disabled writer Taeko that uses a wheelchair to move. When her publisher visits her with his new hire Yuji, he gets close to her and helps Taeko to find the truth about her past. But in the end, which one is the dream?

Where to watch Strange Circus