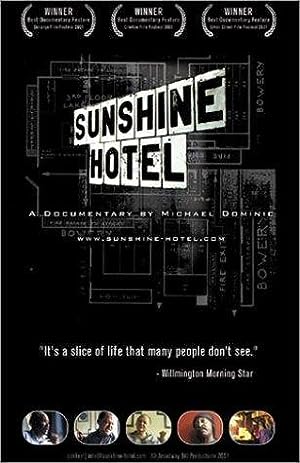 How to Watch Sunshine Hotel 2001 Online in The UK

The cast of Sunshine Hotel

What is Sunshine Hotel about?

The Bowery: for centuries it has been one of New York City's major arteries, in every sense of the word: a gritty and vital counterpoint to the theaters of Broadway and the mansions of Fifth Avenue. Traditionally a rowdy avenue of nickel museums and burlesque shows, by the beginning of the 20th century it had become America's most famous 'skid row', lined with flop houses, missions, and bars. Only a few decades ago, these flophouses served as a nightly refuge for 25, 000 men on the fringes of society: the poor, the wretched, the overwhelmed; some scoundrels, but more of them decent men whose luck had simply failed them. Today only a handful of the old flophouses remain, the rest having been swept away in an implacably rising tide of affluence. These flophouses are the last vestiges of a different time and a different city, and the Sunshine is one of them. At the Sunshine Hotel, nothing has changed in seventy or eighty years. The men still sleep in a warren of 4' x 6' cubicles called pigeon coops, which stand only 7' high beneath 12' ceilings, covered over with chicken wire. The narrow gray hallways are lined with flimsy wooden doors. Behind every door you'll find a man, and a story. Nathan Smith is the manager and a resident of the Sunshine Hotel. He has lived on the Bowery for some twenty years. Nate spends his days at the Sunshine in the "cage", as the front desk is called, or in his room, chain smoking, writing, trading stories, and dreaming of getting off the Bowery. An engaging and articulate man, he is the central character of Sunshine Hotel. We also meet several of the other residents of the Sunshine: army veterans, recluses, drinkers, transvestites, philosophers. We see the toll that life has taken on these men, but we also see how the hardship of life at the Sunshine does breed a particular wisdom, humor, and resilience. This is real life. Not every resident of the Sunshine is a paragon of virtue or a fount of homespun wisdom. But in a society which feels increasingly less responsible for its less fortunate, in which they have become dehumanized to the point of being invisible, a day at the Sunshine Hotel is a pointed reminder that every strand in the fabric of the City is a part of the whole; and that every time one of those strands is removed in the name of civic improvement, something essential is lost.

Where to watch Sunshine Hotel