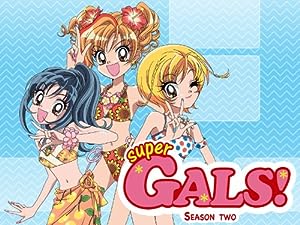 How to Watch Super GALS! Online in The UK

The cast of Super GALS!

What is Super GALS! about?

Ran Kotobuki is the self-proclaimed world's greatest gal. She lives to shop, eat, and have as much fun as possible, because Girls Just Wanna Have Fun. In the midst of all of her goofing off, she protects Shibuya from all manner of undesirable people. Purse snatchers, pushy guys and invading gals from elsewhere don't stand a chance in Ran's territory. Because of this, she's widely respected by the denizens of Shibuya. And although she may look (and even act) a bit shallow, she's got a big heart and a sense of justice that could put her Police Chief father to shame. But she's not interested in that line of work, much to her family's dismay. All she wants is to hang out with her best friends Miyu and Aya, and continue being the world's greatest gal forever.

Where to watch Super GALS!