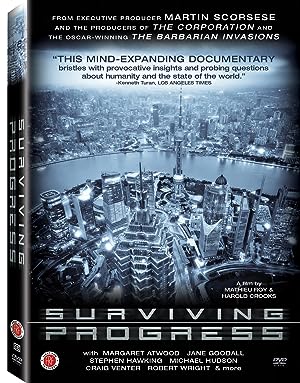 How to Watch Surviving Progress 2011 Online in The UK

The cast of Surviving Progress

What is Surviving Progress about?

Humanity's ascent is often measured by the speed of progress. But what if progress is actually spiraling us downwards, towards collapse? Ronald Wright, whose best-seller, A Short History Of Progress inspired SURVIVING PROGRESS, shows how past civilizations were destroyed by "progress traps" - alluring technologies and belief systems that serve immediate needs, but ransom the future. As pressure on the world's resources accelerates and financial elites bankrupt nations, can our globally-entwined civilization escape a final, catastrophic progress trap? With potent images and illuminating insights from thinkers who have probed our genes, our brains, and our social behaviour, this requiem to progress-as-usual also poses a challenge: to prove that making apes smarter isn't an evolutionary dead-end.

Where to watch Surviving Progress