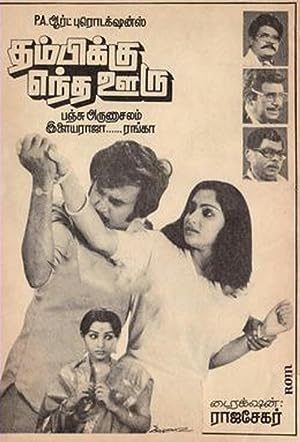 How to Watch Thambikku Entha Ooru 1984 Online in The UK

The cast of Thambikku Entha Ooru

What is Thambikku Entha Ooru about?

The film begins by showing Rajni as a lavish spendthrift, with a cavalier attitude towards life. Born to a rich father played VS Raghavan, Rajni has a very rampant and violent behavior. Worried about Rajni's behavior, his father decides to send him to his friend Gangadharan's village, Sendhamarai to work for him with a condition that Rajni will not reveal that he is son of gangadharan. Rajni develops a good relation with gangadharan and his family. During the course of his time, he develops a liking for the arrogant rich girl Madhavi. Madhavi assuming Rajni to be a poor villager humiliates him all the time. In a cat fight Rajni kisses Madhavi. From this point Madhavi develops a liking for Rajni and eventually they fall in love. In a triangular story line, Gangadharan's daughter played by Sulokshana, also falls in love with Rajni, however Rajni advices and also reveals that he is in love with Madhavi. A dejected Sulokshana agrees to marry a man selected by her father, played by Sathyaraj. Madhavi's father played by Vinu Chakravarthi coming to know about her love for Rajni, decides to get her married by force to Nizhalgal Ravi. Rajni rescues her and takes refuge in Satyaraj's house. However Sathyaraj turns her over back to the Nizhalgal Ravi who is villainous. In a final fight sequence Rajni rescues Madhavi from Nizhalgal Ravi and returns her to her father. Rajni then leaves the village after learning hard work, discipline and many other good virtues from Gangadharan. The final scene shows Madhavi and her father at Rajni's father house discussing marriage for Madhavi. Madhavi trying to refuse suddenly realizes that she is actually in Rajni's house and to everyone's surprise Rajni clad in a full suit walks down the stairs with the credits starts rolling

Where to watch Thambikku Entha Ooru