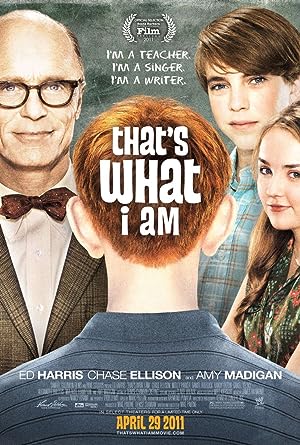 The cast of That's What I Am

What is That's What I Am about?

A coming-of-age story set in 1965 that follows 12-year-old Andy Nichol (Chase Ellison), a bright student who, like most kids his age, will do anything to avoid conflict for fear of suffering overwhelming ridicule and punishment from his junior high school peers. Everyone's favorite teacher, Mr. Simon (Ed Harris), pairs Andy with the school's biggest outcast and social pariah, Stanley, aka "Big G" (Alexander Walters), on a critical term project. Sporting thick orange hair, a head too big for his body and ears too big for his head, "Big G" has been the object of ridicule since grade school. Before long, Andy will learn that there was truly a method behind Mr. Simon's madness as to why he teamed these two up. As the story unfolds, Mr. Simon finds himself the target of a malicious rumor after Principal Kelner (Amy Madigan) suspends a school bully for brutally beating up a female classmate whom he thinks has "cooties." When Andy watches "Big G" fearlessly confront the school bully, a series of events are triggered which change the lives of both young men - and their teacher - forever. Much to Andy's surprise, "Big G" is a brilliant, kind, tolerant and decent human being who has more dignity than anyone Andy has ever encountered.

Where to watch That's What I Am

More Comedy tv shows like That's What I Am