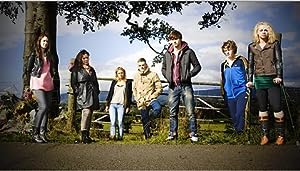 How to Watch The Crash Online in The UK

The cast of The Crash

What is The Crash about?

Student Kate Harper returns home for the Christmas break and joins her boyfriend Tom,his brother Brian and friends Rachel,Leah,Ashley and Ethan to go to the pub in two cars. It is a rainy night and,in trying to overtake a lorry,Tom,followed by Ethan,causes a crash. Tom and Leah crawl from the wreckage but not everybody is as lucky. Six months earlier Kate is helping Rachel get over a failed romance,encouraging her to go to the prom. Ashley,nursing an ailing father,helps Tom choose an engagement ring for Kate whilst budding footballer Brian is hoping to be talent-spotted.Kate's parents give a party where Rachel's sister Leah picks up Brian,after which the youngsters go to the prom. Here Rachel gets back with old flame Ethan whilst Kate accepts Tom's marriage proposal. Now Rachel is in a coma and Kate,Ashley and Brian dead. Kate's grieving parents are momentary lifted by the floral tributes brought by friends led by Leah and their memories of their daughter.As Rachel wakes from her coma Tom,riddled with guilt exiles himself from the others and stays away from the funerals,causing Leah to term him a coward. Nine months later Tom and Ethan appear in court but are cleared of causing death by dangerous driving though Tom's mother cannot forgive him and the others reject him. THough still on crutches it is Rachel who welcomes him back into the group as large numbers turn out to remember the deceased on the anniversary of the crash.

Where to watch The Crash