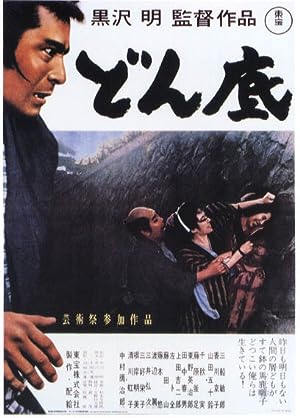 How to Watch The Lower Depths 1957 Online in The UK

The cast of The Lower Depths

What is The Lower Depths about?

In medieval Japan, aging Rokubei, his younger wife of four years Osugi and her uncle run a tenement complex at the bottom of a cliff, the complex which from the naked eye at the top of the cliff looks like nothing more than a rubbish heap. The tenants are a group of down-and-outers with some who operate on the far side of the law. Nonetheless, the tenants are close knit community in wallowing in their collective misery, those who care who know their lives will never get better as long as they stay there. The landlords have no compassion for the tenants, they mockingly only stating that the tenants will be given a favorable standing in a future life for any good deeds done around the tenement. The recent arrival of Kahei, a mysterious elderly man, affectionately referred to as Grandpa, who spins tales of the unknown, provides at least hope that there is a better life out there somewhere. Sutekichi, a thief who arguably is the leader among the tenants, and Osugi are carrying on an affair behind Rokubei's back. Although he has previously professed his love for her, the words were more an empty platitude. He begins to have feelings for Osugi's younger sister, Okaya, who works for her sister cleaning up the tenement under her watchful eye. Okaya does not know if she can trust the words of anyone who lives in the complex, while Osugi, who knows of Sutekichi feelings for Okaya, begins to have feelings of jealousy. Osugi and Sutekichi work toward their own goals at the expense of others within the complex.

Where to watch The Lower Depths