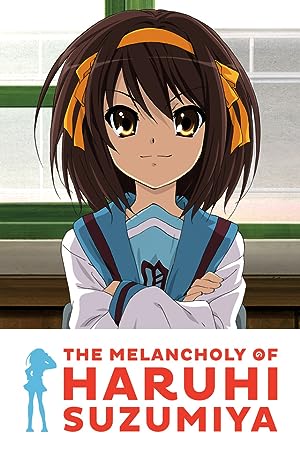 The cast of The Melancholy of Haruhi Suzumiya

What is The Melancholy of Haruhi Suzumiya about?

On his first day of high school, Kyon meets an eccentric girl named Haruhi Suzumiya, who announces to the class that she is interested only in meeting aliens, time travelers, and espers. Discontent with the selection of afterschool clubs presented before her, she starts a new club called the SOS Brigade and enlists Kyon, a quiet bookworm named Yuki Nagato, a shy but beautiful junior named Mikuru Asahina, and a grinning and loyal transfer named Itsuki Koizumi. Each of them except Kyon is secretly part of one of the groups Haruhi desired to meet, and they all must keep close watch on her. If she ever grows dissatisfied with reality, she may unintentionally destroy the world.

Where to watch The Melancholy of Haruhi Suzumiya

More Animation movies like The Melancholy of Haruhi Suzumiya

More Animation tv shows like The Melancholy of Haruhi Suzumiya