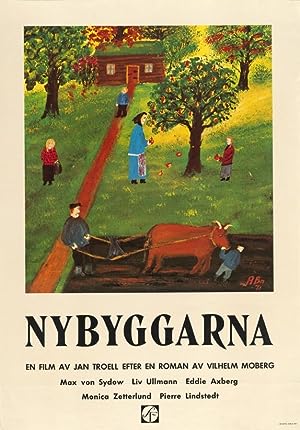 How to Watch The New Land 1972 Online in The UK

The cast of The New Land

What is The New Land about?

The continuing saga of the Nilssons - husband and wife Karl-Oskar and Kristina, their several young children with another on the way, Karl-Oskar's younger brother Robert, and some of their extended family members such as Kristina's Uncle Danjel - and several of their Swedish compatriots is presented. This phase of their story begins where their saga in The Emigrants (1971) left off, in the fall of 1950, having just arrived in Minnesota from their native Sweden to begin what they hope will be a better life. They left Sweden because of the harsh and worsening conditions of their farm life, and chose Minnesota based on the stories of many of their Swedish friends who emigrated there before them. While Karl-Oskar goes through the process of setting up their homestead, eighteen year old Robert already has bigger dreams of striking it big in the California gold rush, something he is reluctant to tell Karl-Oskar until he is ready to leave if only having been under Karl-Oskar's guardianship and Karl-Oskar perhaps thinking him too young, impulsive and thus foolish. His plan is to go with his best friend Arvid, the two of them who would take the steamship down the river to St. Louis, from where they would walk the rest of the way. Also reluctant to say anything is Kristina, who can't help believe they made a mistake in leaving Sweden and their known life. Karl-Oskar and Kristina go through a series of highs and lows in their new life, some related specifically to being in Minnesota at this point in time, such as dealing with Indians and the imminent Civil War, and not knowing the language, and some related to their general life regardless of location, including Kristina's feeling of her role in the family. Robert's California tale is also told, he who returns back to Minnesota with a bagful of money four years after leaving, but who looks a little worse for wear.

Where to watch The New Land