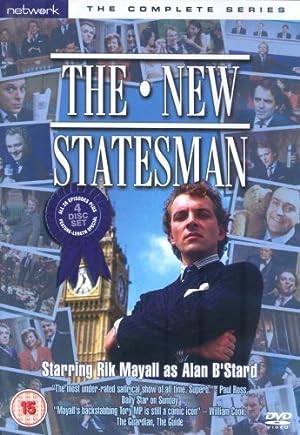 How to Watch The New Statesman Online in The UK

The cast of The New Statesman

What is The New Statesman about?

Tells the adventures of Conservative MP Alan B'Stard, a man who doesn't have any morals at all. He stops at nothing to make himself richer and more powerful in the party and is involved in drugs, adult films, fraud (making up charities with the initials C.A.S.H when writing on cheques) and even murder but believes that he will never be caught as he is a Conservative MP and therefore all powerful. He has almost complete power over another MP - Piers Fletcher-Dervish who is nearly completely brainless. His wife Sarah B'Stard has very loose morals (both of them have affairs mostly every day) and has hated her husband from five minutes after they got married and tries to use Alan to get anything she wants. Each episode contains recent news items and Alan moves with the times with things like the end of the cold war, the Nazi hunt in the late 80's as well as the Animal Freedom Party. Keeping up with the huge amount of cash, Alan moves (in the 4th season) to the European Union to continue to make herself richer and to climb to the most powerful position he can reach...

Where to watch The New Statesman