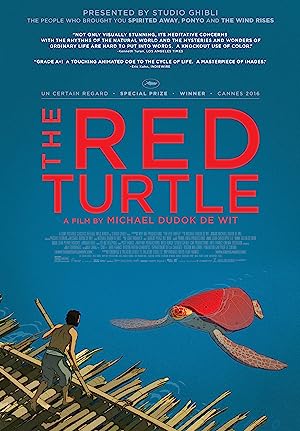 How to Watch The Red Turtle 2016 Online in The UK

The cast of The Red Turtle

What is The Red Turtle about?

Surrounded by the immense and furious ocean, a shipwrecked mariner battles all alone for his life with the relentless towering waves. Right on the brink of his demise, the man set adrift by the raging tempest washes ashore on a small and deserted tropical island of sandy beaches, timid animal inhabitants and a slender but graceful swaying bamboo forest. Alone, famished, yet, determined to break free from his Eden-like prison, after foraging for food and fresh water and encouraged by the dense forest, the stranded sailor builds a raft and sets off to the wide sea, however, an indistinguishable adversary prevents him from escaping. Each day, the exhausted man never giving up hope will attempt to make a new, more improved raft, but the sea is vast with wonderful and mysterious creatures and the island's only red turtle won't let the weary survivor escape that easily. Is this the heartless enemy?

Where to watch The Red Turtle