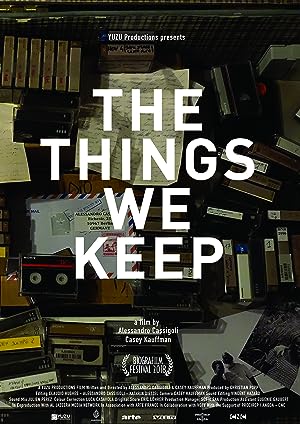 The cast of The Things We Keep

What is The Things We Keep about?

Casey, the new flatmate, was everything Alessandro was not. He was energetic and adventurous - even charismatic. But instead of being annoyed, Alessandro started to document this strange creature with his videocamera. They were in their early twenties and living in Rome...every experience together felt new and exciting. But when Casey moved to the Middle East to work as a TV journalist, Alessandro's world was cranked open even more. Alessandro started collecting Casey's footage and soon found himself immersed in his travels. There were smugglers in Mali, medics in Gaza, and snipers in Aleppo...the world beyond Alessandro's comfortable, stagnant life in the West became vast and real. Alessandro lived vicariously through Casey for years until both of them started to change. Thanks to Alessandro's pensive approach to life, Casey finally started to look inwards, while Alessandro found the courage to break out of his comfort zone. Drawn from 15 years of footage, The Things We Keep is both an intimate look at friendship, and a celebration of people's common humanity.

Where to watch The Things We Keep

More Documentary tv shows like The Things We Keep