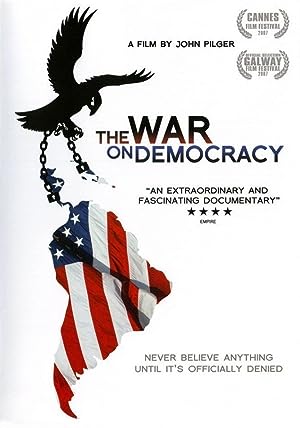 The cast of The War on Democracy

What is The War on Democracy about?

Award winning journalist John Pilger examines the role of Washington in America's manipulation of Latin American politics during the last 50 years leading up to the struggle by ordinary people to free themselves from poverty and racism. Since the mid 19th Century Latin America has been the 'backyard' of the US, a collection of mostly vassal states whose compliant and often brutal regimes have reinforced the 'invisibility' of their majority peoples. The film reveals similar CIA policies to be continuing in Iraq, Iran and Lebanon. The rise of Venezuela's Hugo Chavez despite ongoing Washington backed efforts to unseat him in spite of his overwhelming mass popularity, is democratic in a way that we have forgotten or abandoned in the west. True Democracy being a solid 80% voter turnout in support of Chavez in over 6 elections.

Where to watch The War on Democracy

More Documentary tv shows like The War on Democracy