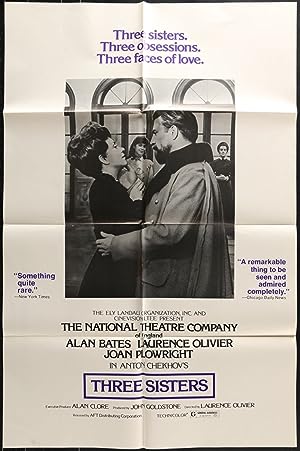 How to Watch Three Sisters 1970 Online in The UK

The cast of Three Sisters

What is Three Sisters about?

Olga, Masha, and Irina Prozoroff lead lonely and purposeless lives following the death of their father who has commanded the local army post. Olga attempts to find satisfaction in teaching but secretly longs for a home and family. Masha, unhappy with her marriage to a timid schoolmaster, falls hopelessly in love with a married colonel. Irina works in the local telegraph office but longs for gaiety. Their sense of futility is increased by their brother's marriage to Natasha, a coarse peasant girl. She gradually encroaches on the family home until even the private refuge of the sisters is destroyed. They dream of starting a new life in Moscow but are saddled with the practicalities of their quiet existence. Despite their past failures, they resolve to seek some purpose and hope when the army post is withdrawn from the town.

Where to watch Three Sisters